It's That Time of Year Again- Light The Night With Me! 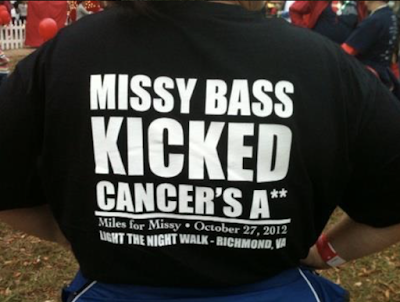 Please help me support The Leukemia & Lymphoma Society's Light The Night Walk by donating towards my fundraising efforts today. You can help bring us closer to living in a world without cancers!

Many people through the years have asked about "my story." So here it goes...

Cancer people always remember the day their entire world changed. Some ask why, I was more like "WTF, are you kidding me?" I had a cough. A cough that was piercing to everyone's ears and it hurt! Kirk said I had TB, some thought I had whooping cough and there was even a kennel cough thrown in there (Thank you, Mitch!). At first, my doctor just thought it was allergies and asthma. After 2 weeks, it wasn't any better--maybe I had bronchitis? He listened to my chest and determined that I was wheezing and my lungs did sound congested. 3 weeks later, my cough was even worse. I was throwing up all the time when I coughed and I couldn't catch my breath--it was terrible! Being at my wits end, I went back to the doctor and he ordered a chest x-ray, maybe I had pneumonia?, but it didn't sound like it. The scan was done right before July 4th weekend, and my doc wouldn't be back in for about week. No big deal, I had dealt with it for this long what's a few more days?!

I will tell you this, no one will ever tell you that you have cancer over the phone. When I was told I needed to come into the office and whenever I got there would be fine, I knew something was definitely wrong. I've never had a shorter wait to get into see my doctor!! And then he dropped the bomb of my life.."You see this?" as he pointed to a mass that was sitting on my bronchial tubes shown on the xray, "This is a problem." He handed me a piece of paper with 2 names on it, one was a thoracic surgeon, the other an oncologist. I kind of stared at him, " Do I have cancer?" He hadn't exactly said it quite yet. "Yes, but you are going to be fine. I promise."

I walked out of his office in a daze, got to my car and called my mom, who was suffering with Stage IV breast cancer. "Mom, I have cancer." Typical of my mom, "No, you don't. Missy, quit screwing with me." --still makes me laugh that I can hear her saying it now:) Side bar: I was strangely obsessed with calling my mom and saying things to get a rise out of her i.e. I was pregnant, had eloped, gotten my nose pierced, gotten a tattoo, etc.

I digress...My oncologist appointment was first and my dear friend Branch went with me. She was my scribe. She knew I would be too wound up to take in everything that was being said--she was 100% correct. My oncologist said I either had lymphoma or something else with an 'oma', but I had a very high rate of success for remission. Next up, thoracic surgeon. He took one look at my xrays and said I had Hodgkin's Disease--he didn't know which one, but that's what I had. Now, I have always been a fly by the seat of my pants kind of person, but this was a lilttle ridiculous. In a one week span, I had been diagnosed with cancer, was supposed to have a major surgery (they were deflating one of my lungs to get to the "oma" which was near my heart, inserting my port and inserting this kick ass pain killer contraption into me) and I had 2nd row tickets to a Yankees-Rays game in Tampa behind the Yanks on-deck-circle!!. After a little haggling, I was cleared to go to my game (yes, my beloved Yanks won!) and would have the surgery the day after I got back. I won't even go into my hospital stay---What a hot mess!!

I didn't tell a lot of people my diagnosis. My tight circle of friends knew and my family. I didn't want anyone to feel sorry for me or say something awkward because truly, what do you say in the situation--sorry you have a sickness where you are going to lose all your hair and energy, feel like shit for awhile and be in a situation for the better part of a year that changes everything in your life? They don't make a Hallmark card for it, I looked:) I had cancer and I wasn't going to die. Just needed some time to get through my issues and deal with myself. For the next 6 months, I went to chemo every two weeks, and then had radiation for 17 sessions. I would take chemo every day to not have radiation--it is the worst!!

October 2012, I was finally put in remission and my chemo port was removed. This little cancer spell was behind me.

I was very lucky, my cancer was caught in the early stages and I had an awesome team of doctors--some are not that lucky, which is why I now raise money for LLS! They help people who are not Missy Bass. Those who don't have insurance and live in the metropolis of Richmond where cancer centers are cutting edge. Those who don't have friends and family who will take them to all their doctors appointment while they are going through treatment. It's these people that I want to help and with you, it's possible:) 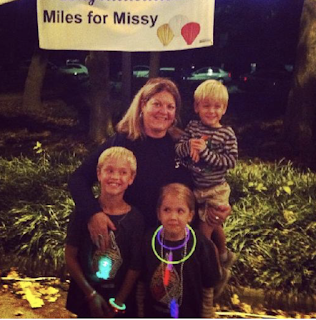 This year I’m doing it because I’ve watched, Eleanor Brooks, a TRUE warrior battle her 4th time with cancer, and she’s only 11 years old! If that doesn’t make you want to give, cheer, join the cause-- I don’t know what will!! She is a Champion in my eyes and I can’t wait to share some of the AMAZING things we have in store for her! Seriously, I’m in awe of her, her family and their unwavering determination.

The walk is October 12th-Come join me: