We CAN fight...and we can win.

I am so honored to have been featured in CEO Magazine.  I've heard so many inspiring stories from men and women out there who have fought or are still fighting their battle with cancer and I hope mine serves as an inspiration to others as well.  That's why every year I put my best efforts into raising money and awareness through the Leukemia and Lymphoma Society's Light the Night Walk this October 17th.  Help me reach my goal this year and visit Richmond's Light the Night page to make a donation!

Here is the article from CEO Magazine, written by the amazing Zack Hurst

Wonder Woman from RVA
September 14, 2015
By Guest: Zack Hurst
Cancer. It’s a small word. Yet one that is often just whispered because speaking it out loud reminds us of the devastating heart-break and pain it leaves in its wake. Before I was 27yrs old, my life had been cancer free. I didn’t know anyone that had ever had cancer and to the best of my knowledge, nobody in my family had ever had cancer. Of course, that changed. I have since lost two people that I loved to cancer and met many other people who have lost family and friends as well.

However, while we all know the dark side of this terrible disease, we often forget that there are so many inspiring stories of people that have fought cancer and won. This is the story I believe that we need to share more often. We need to be reminded that cancer is limited, and it can be beaten.

Missy Bass is exactly the kind of person that, when you meet her, you aren’t surprised she beat cancer. She is one of the most positive, down to earth, funny and enjoyable people that I’ve had the pleasure of meeting. 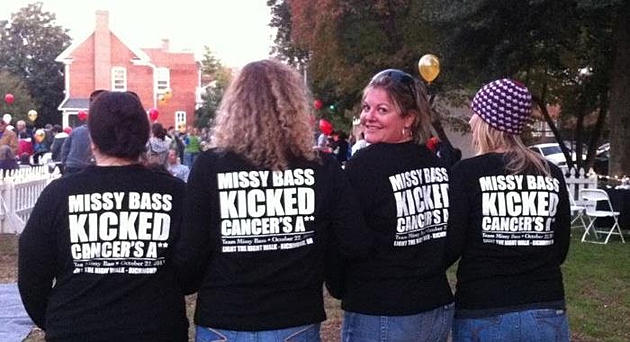 Cancer survivors always remember when their entire world was flipped on them. Missy started with a cough. Not a little polite cough into the handkerchief kind, but a painful ear piercing cough. Naturally, everybody weighed in with their opinion and diagnosis for her. Friends and family suggested everything from tuberculosis to whooping cough and even kennel cough. Her doctors were suggesting allergies or asthma. The next couple of weeks only got worse. Night sweats and vomiting were becoming regular and at times she couldn’t catch her breath. One more trip to the doctor and he was convinced to order a chest x-ray.

When the results were in, Missy was asked to come into the doctor's office. She was ushered right in without waiting. ”You see this?” the doctor said as he pointed to a mass that was sitting on her bronchial tubes, "This is a problem." He handed her a piece of paper with two names on it, one was a thoracic surgeon, the other an oncologist. She just stared at him, " Do I have cancer?" (He hadn't exactly said it quite yet.) “Yes” he said, “but you are going to be fine. I promise.”

Growing up, Missy was the hypochondriac of her family. Constantly persuading that she had any number of illnesses, her family was used to hearing about a new diagnosis. Additionally, she was strangely obsessed with calling her mom and saying things to get a rise out of her i.e. she was pregnant, had eloped, gotten her nose pierced, gotten a tattoo, etc.

As she walked out of the doctors office in a daze, her mother (who, at the time, was battling stage 4 breast cancer herself) was the first person she called. Maybe not too surprisingly, her mom didn’t buy it and actually hung up on her. She called her back and told her again. The answer, “No you don’t Missy, quit screwing with me.”

Of course, the reality of diagnosis finally set in for her and her family and the battle for her health ensued. She had surgery within a month followed by radiation and chemo therapy. With the exception of the three weeks following her surgery, she worked the whole time. Missy gives credit to having a very strong support system of family, friends, coworkers (she was 1 of 4 women fighting cancer in her office at the time) and her sorority sisters. In October 2012, two years later, she was told she was in remission.

Missy currently works in the mortgage industry and has been since she was 22yrs old. She loves working with people and says that she is a, “champion for the single Mom.” Growing up, she remembers her mother being divorced, and the struggle that she went through afterwards.

She says that life is very relative now and that the experience of having cancer has made her a more understanding and caring person. Being diagnosed with cancer makes you realize what and who is important in your life.

We all know stories of sorrow, pain, and devastating loss as a result of cancer in our lives. Isn’t it time that we start telling the inspirational stories that give us hope? Cancer is a small word, but that doesn’t mean we have to let it destroy our lives in a big way.